***BOOK REVIEW - My Ritchie Valens book is reviewed and featured in the September 2019 issue of the UK music magazine The Beat. Check it out here!
http://beat-magazine.co.uk/2019/09
Posted by Ryan at 3:45 PM No comments:

Recently I was interviewed on 89.1 FM KHOI (Central IA) for Stephanie Bates' show "Love of Music".  I played some of my own songs, and shared a few of my favorites by others. We talked about songwriting, the blues, playing guitar, teaching music, music history, as well as my new Ritchie Valens book, Ritchie's music and the Winter Dance Party.

The interview is available on my Interview page at http://www.ryansheeler.com/interviews
Posted by Ryan at 11:50 PM No comments: 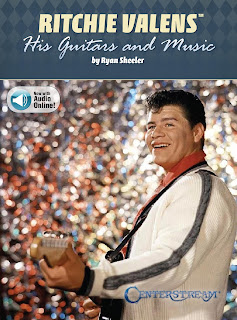 Ritchie Valens: His Guitars and Music is the new book by guitarist and author Ryan Sheeler available from Centerstream Publishing (distributed by Hal Leonard Inc.).   The book spotlights the guitars and playing style of Ritchie Valens; the first nationally famous Latino rock star.   Valens was a talented young singer and performer but was also a very skilled guitarist.  Many who knew and worked with him attested to his talent and skill on the instrument.
Ritchie Valens: His Guitars and Music looks at Ritchie’s guitars that he owned and used both live and in the studio.  The book is filled with photographs of Ritchie, his instruments, commentary from musicians with whom he played and sanctioned by Ritchie Valens’ estate. The book also offers a new transcription of “La Bamba” with guitar tablature of Ritchie’s iconic guitar riffs and solo – with a bonus transcription of the guitar solo from Los Lobos’ version on the 1987 film soundtrack.   The book includes an audio portion where Sheeler discusses and performs the guitar riffs and solos of "La Bamba” in a full band setting.

Ryan Sheeler is Lecturer in the Department of Music at Iowa State University where he teaches the History of Rock ‘n’ Roll and performs as a guitarist in the Central Iowa area.

Ritchie Valens: His Guitars and Music is available through Centerstream Publishing and Hal Leonard, Inc.


*Pre-Release* - I am very excited that my new guitar book on Ritchie Valens will be released in a few weeks from Centerstream Publishing. More info to come in a few weeks. Pre-Release press info below.
Pre-Release link from C3 Entertainment
Posted by Ryan at 3:53 PM No comments:

ISU Spring Musical time is here! Shows are the next two weekends. I play these from time to time when I get asked and this year I'll be on guitar in the pit band. Tickets available now!
https://www.music.iastate.edu/productions/2018-2019/godspell
Posted by Ryan at 5:05 PM No comments:

NEW BOOK RELEASE (1 of 2 coming this year!): Very pleased to announce the brand new 4th Edition of From Bakersfield to Beale Street: A Regional History of American Rock 'n Roll from Kendall-Hunt Publishing. Very honored to work with Dr. David Stuart and the staff at Kendall-Hunt. I believe this is our best edition yet! Available now in Print and EBook form. I will also soon be listed on Amazon, Barnes and Noble and other booksellers.
https://he.kendallhunt.com/product/bakersfield-beale-street-regional-history-american-rock-n-roll-rockabilly-mtv